More than one third of the world's coastlines are threatened by climate change and rapid urbanisation, which is causing unprecedented coastal degradation1. And the outlook is not great. With a worst-case scenario is of a sea level rise of 2 m by the end of the century, the situation for coastal communities is critical2.

This situation is exacerbated by the destruction of natural barriers like mangroves or coral reefs that act like natural buffers between land and the ocean, mainly due to farming, pollution and coastal urbanization. On average, mangrove habitats are declining at a rate of 0.66% per year; 75% of the world's coral reefs are rated as threatened and 85% of oyster reefs have been lost globally3. 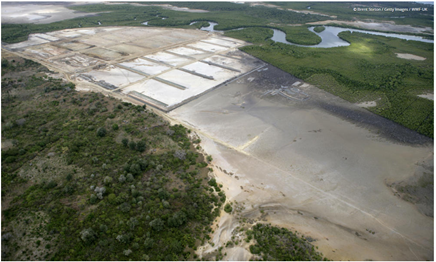 Coastal barriers provide protection to flooding and erosion by reducing the impact of waves, storms and wind impacting the shoreline. Man-made, concrete-based solutions such as groins, dikes, walls, dams and weirs were very popular in the last 50 years, but have proven not effective for long-term protection of the coastline due to irreversible damage and inability to cope with the increasing sea level rise. In addition, these structures frequently induce erosion in nearby areas and natural ecosystems and ocean dynamics3. 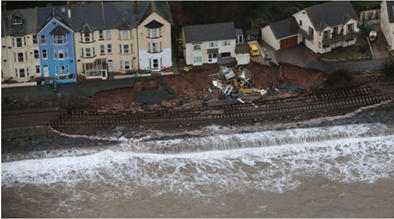 Broken seawall in Dawlish, UK after a storm. (https://www.networkrail.co.uk/).

In contrast, engineered nature-based systems (NBS), including coastal wetlands, reefs and seabeds/kelp forests are a sustainable alternative with environmental, economic and social benefits: reduced use of energy intensive materials like concrete; carbon capture; protection and creation of habitats and coastal activities; and enhancement of tourism and fisheries to name a few.

These ecosystems contribute to coastal protection by reducing wave energy, increasing sedimentation, and/or reducing erosion and movement of sediments3. On average, coastal habitats reduce wave heights between 35% and 71%. Growing in the tidal zone a 100 m deep mangrove forest can reduce up to two thirds of the wave energy. Salt marshes reduced wave height by almost 61%3, and total wave energy by an average of 82%. Coral reefs reduce wave heights by 70% and seagrass/kelp beds by 36%.4 NBS accrete sediment over time, being effective against sea level rise, maintain or restore ecosystems and can be easily integrated in already implemented coastal protection structures. In terms of carbon sequestration, a salt-marsh intertidal habitat would be capable of capturing up to 2.2 tonnes of carbon per hectare per year, with an economic benefit of £1.7 million over a period of 50 years, while the same land used for farming would act as a net source of carbon.

Salt-marshes are coastal wetlands of salt-tolerant plants that occur in low energy tidal coastlines like estuaries and embankments in temperate and high latitudes. It is now recognised that damages from hurricane Katrina in 2005 were exacerbated by the extensive loss of salt marshes in the Mississippi River delta (Tibbetts 2006). In Europe, implementation of salt marshes as NBS is particularly relevant in the North Sea, with multiple restoration projects to impulse adaptation of current dikes to climate change like the Netherlands Wadden Region Delta Programme5.

Mangroves are salt-tolerant small trees that extend along the shorelines in tropical and sub-tropical climates. In the past 50 years, mangroves have been critically reduced mainly due to shrimp farming. Acknowledging the unvaluable benefit of this ecosystem for flood defence, biodiversity, economy of coastal communities and eco-tourism, a large number of restoration projects have been successfully implemented, particularly in South America and Asia, like the Global Mangrove Alliance (https://www.mangrovealliance.org/). In India, mangrove forests have been protected for over 50 years. These were shown to protect villages and crops from flooding during a cyclone with 260km/h winds and a 9m storm surge (naturebasedsolutionsinitiative.org). 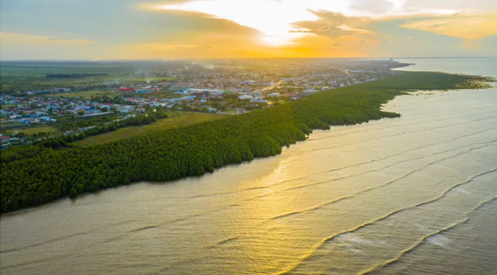 Coral reefs extend parallel to the coastlines around the world forming impressive structures of 100s of km, rising from the deep ocean. Coral reefs give shelter to many marine organisms and promote biodiversity, being known as the tropical rainforests of the sea. During extreme storm events, common in many tropical regions, coral reefs are immensely important in dissipating wave energy. They can have rapid rates of accretion, with geological records from the Great Barrier Reef showing sustained growth rates of 0.3 to 0.9 m/100 years3. Restoration of corals is challenging due to ocean acidification, yet, efforts in increasing resilience of corals to climate change are showing promising results. Artificial seeding and implementation artificial coral reefs (www.ccell.co.uk) are widespread techniques to increase coral population worldwide. 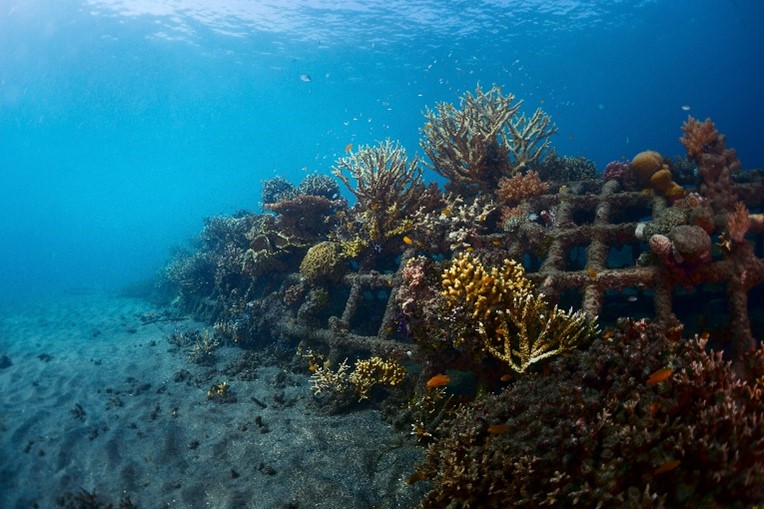 Reef building shellfish species such as oysters and mussels grow along the coastlines of both tropical and temperate climates. Shellfish reefs reduce wave energy, stabilise sediments and debris, provide shelter for biodiversity and a source of food and improve the local economy. Shellfish reefs also improve water quality by filtering out pollutants and can enhance and maintain adjacent habitats such as salt marsh and seagrasses, further increasing shoreline stabilisation. The photo below shows the benefits of artificial shellfish reefs in salt-marsh stabilisation in Bangladesh. Here, a 50 cm vertical relief of breakwater reefs resulted in long-periods of reduced wave height, resulting in an area of influence over 30 m behind the reef favouring sediment accumulation6. 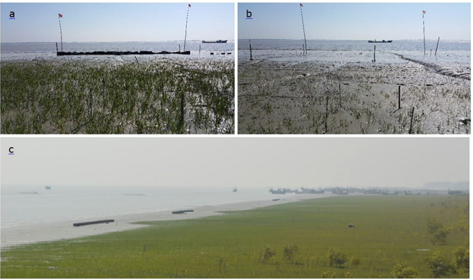 Living oyster breakwaters are an attractive alternative to concrete barriers as they can be constructed using sustainable native materials, have the potential to increase in size over time, and are less likely to require long term replenishment to remain effective.

Lack of testing, monitoring and reporting on the performance and costs of NBS increase the uncertainty of stakeholders to accept and invest in these technologies. Due to the multi-disciplinarity of NBS, the responsibilities and obligations to fund, implement and maintain NBS in the long-term are not always clearly distributed. Conflicts particularly in situations where NBS on public and private properties are concerned. In addition, lack of specific regulation and funding schemes difficult the acquisition of investment and land for NBS.

However, NBS are gaining acceptance rapidly among stakeholders given their long-term benefits and cost-effectiveness against climate changes7. Surely, we will see a progressive shift from concrete to natural systems in our coasts in the near future.