Along the shores of Mexico, Sargassum seaweed is piling up, bringing with it a bad smell and some interesting opportunities.

You've probably heard about the giant “plastic island” floating in the Pacific. In the Atlantic, however, lies a massive island made of seaweed, totalling an estimated 12.7 million metric tonnes. 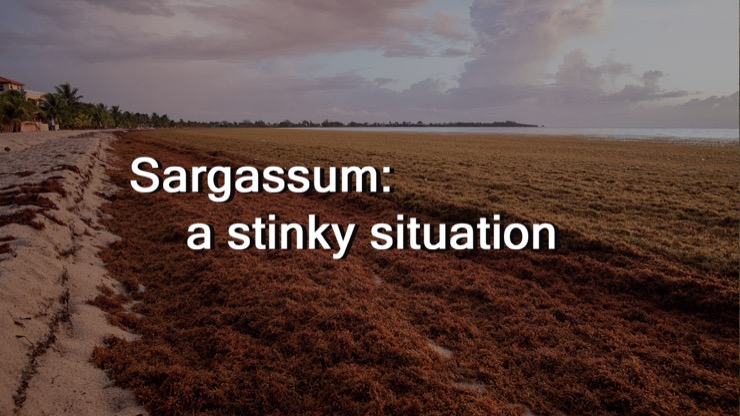 The Great Atlantic Sargasso Belt, as it's called, spans more than 8,900 kilometres from western Africa to the Gulf of Mexico. That itself isn't much of a problem – it's when the sargassum washes ashore and rots in the summer sun that it becomes a headache for governments all over the tourism-reliant Caribbean.

While the earliest record of the Sargasso Belt dates back to 1492, when Christopher Columbus and his crew noted heaps of the seaweed floating across the Atlantic, the exponential growth in the region was first spotted by satellite in 2011. And now, the sargassum bloom is here to stay, scientists say. “We have pretty much six months with sargassum and six months without sargassum,” said Esteban Amaro, director of the Sargassum Monitoring Network in Cancun, Mexico.

This rapid expansion over the past decade is likely due to the high amount of fertiliser flushed into the ocean: researchers found that in Brazil, its usage had increased 67% from 2011 to 2018, while in the United States, phosphorus levels from fertiliser runoff into the Mississippi River were 49% above the long-term average last year.

Meanwhile, “climate change is causing more carbon dioxide to be absorbed by the oceans,” explained Professor Mike Allen, a Welsh scientist studying the issue, which creates the perfect environment for sargassum to thrive. In the open sea, sargassum blooms can actually be useful, providing a habitat for sea life. But their uncontrolled growth is proving to be a logistical nightmare for scientists, hotel chains, and governments all through the Caribbean. 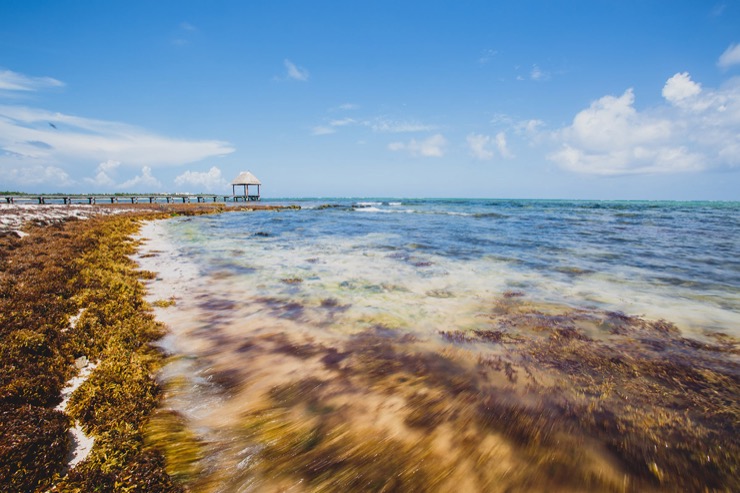 The build up of seaweed on Caribbean Beaches. Via unsplash

Not only does the stinky, slimy seaweed deter tourism across the coast, but it also creates health concerns for residents, in and out of the water. The hydrogen sulphide released by washed-up sargassum, which is the compound responsible for the seaweed's foul odour, has been shown to cause neurological and respiratory issues in just a short time.

Even worse, it could spell disaster for marine life along the Gulf of Mexico's beaches. “The seaweed is choking coral reefs,” Allen said, referring to a disease called “white syndrome” that's been thought to be caused by sargassum – in some spots, 50% to 80% of corals died within six months of contracting the disease, which began in peak sargassum season.

In 2018, scientists from Mexico's Institute of Marine Sciences and Limnology discovered that animals from at least 78 species, including fish, lobsters and octopi, had died due to the sargassum. And last year, around 100 baby turtles were found by beach cleaners on the Sian Ka'an Biosphere Reserve in Quintana Roo, having died trapped in the mounds of sargassum (though the government later refused to say whether or not sargassum poses a threat to the endangered sea turtles).

Current attempts at solving the issue are costly and ineffective. In 2019, the Mexican navy set aside 52 million pesos (about £1.77 million) to tackle the issue with a couple dozen boats and nets. Last month, the navy boasted of collecting just 802 tonnes of the seaweed along Quintana Roo's shores from May to July – while an estimated 60,000 tonnes landed on Mexican beaches last year.Other short-term solutions include floating barriers installed along the shore – only a few kilometres are currently in place – or specially equipped beach-combing tractors, which only speed up the erosion beaches are also dealing with.

That's where Allen and his team come in – their project, named PhycoMExUK, aims to convert sargassum into a usable biofertiliser through a process called hydrothermal liquefaction. “I like to call it ‘geology in a tin,'” Allen says, explaining that with high pressure and high temperatures, the sargassum separates into a liquid bio-oil, a solid char of heavy metals, and carbon dioxide. 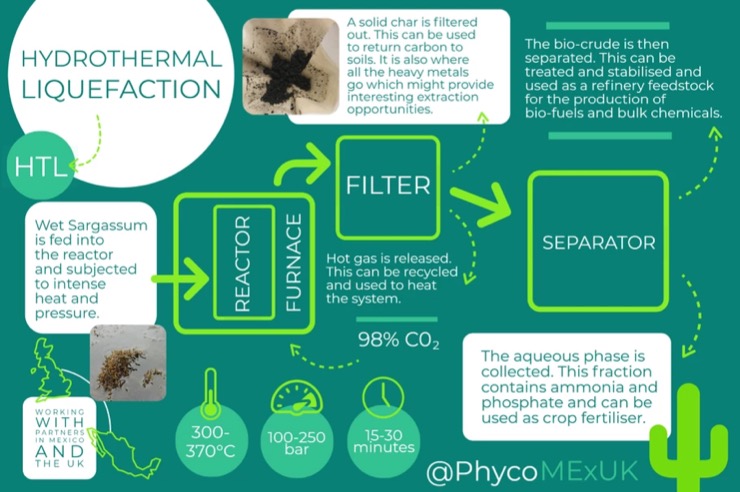 The hydrothermal liquefaction developed by PhycoMExUK

In some parts of Mexico, the unprocessed sargassum is already being used as a fertiliser – but Allen cautions against this, as chemicals released in the decomposition process, like arsenic, can be harmful to agriculture and could poison the water system further.

Once processed, however, the fertiliser could boost Mexico's agricultural sector while ridding beaches of the noxious algae at the same time. And with it arriving by the tonnes, “that's a heck of a resource,” Allen says.

Some Mexican businesses are capitalizing on the moment as well, with several forming the Sargasso Industrial Association in 2019. “We want it to become industrialized in one way or another,” said Héctor Tamayo Sánchez, Puerto Morelos' tourism secretary, last year. “For us, it's not a plague. Sargasso has many uses, even though those uses are still being investigated.”

For Allen and his crew, the scaling process is the next step. They already have government buy-in, they say, they just need industry support to make their project viable. That's why they've partnered with Biorganix, a Coahuila, Mexico-based bio-processing lab, to make their idea of a low-cost, low-impact biofuel made from seaweed a reality.

“This is a huge problem, and there is a climate storm coming,” Allen says. “You could be forgiven if you took a bleak outlook on it, but there are some very passionate people out there like us who are trying to make something positive out of it.”