From out-planted urchins, to sunscreen bans Hawaii is putting the safety of it's coral reefs first…

Home to the largest conserved area in the United states, the archipelago of Hawaii is known for its brilliant beaches and thriving coral reefs. In recent years the iconic coral population that covers over 410,000 acres, a larger area than London, has been under threat from multiple angles. 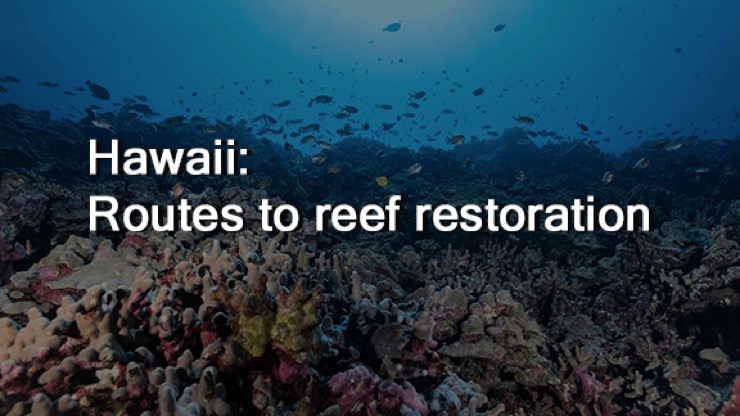 Hawaii is protecting its beauiful coral reefs in anumber of inventive ways.

The most drastic problem for the health of the coral, that dwell in the clear blue waters off the coast of Hawaii, is that of bleaching. Globally over 60% of coral reefs are predicted to be lost in the next thirty years due to mass beaching events. These occur when the ocean conditions the coral are in become unfavourable, this is through warmer and more acidic water, a direct result of climate change. These harsh conditions cause the coral to expel most of their symbiotic algae, which give corals their distinctive colours, and trying to survive without them. Coral reefs recover very slowly from bleaching events and very susceptible to other illnesses (such as white band disease) or overgrowth by other organisms during this time.

Overgrowth of the reef, either by seaweed or the algae that once lived in harmony with the coral, is spurred on by two complex factors. The first is nutrient runoff, the fertilisers and even the chemicals in sun cream that can be harmful to delicate coral ecosystems while boosting plant growth. The second factor is that of overfishing. Where fishing is not controlled or sustainable methods are not enforced, fish that would usually keep the algae under control, such as parrot fish are caught in such a high quantity that those remaining cannot keep the reef in balance.

For each of these complex issues facing Hawaii's reefs there are teams of experts and sustainably minded people working in projects to counter these effects. Each one plays and important part in the preservation of these vibrant ecosystems and together they will turn the tide on Hawaii's coral reefs. 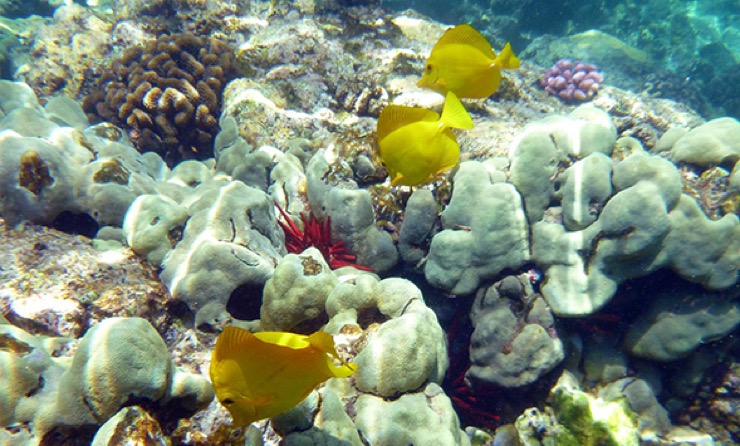 Bleached coral on Hawaii's reefs support less marine life and have a lower change of survival.

One quick way in which Hawaii is tackling the detrimental effects of sunscreen is by instituting a state-wide ban on sunscreens containing ingredients not considered "safe and effective" by the Food and Drug Administration. This ban is built on earlier work to stop the sales of sunscreen with oxybenzone and octinoxate by January 2021. This ban was the first of its kind aimed at addressing every-day chemicals that enter the ocean. It's main target is tourism, an industry that is heavily reliant on coral reefs, by ensuring those who visit Hawaii don't accidentally harm the very reefs they came to see. In protecting their reef through legislation Hawaii starting a meaningful trend for which several islands and even the entire country of Pilau followed suit. However these protections come with a warning: "No sunscreen is reef safe. If you have 30 or 3,000 people going into an upland pool or a bay, that sunscreen pollution can have an impact," explains Dr. Craig Downs, executive director of the non-profit Haereticus Environmental Laboratory in Virginia. “If a person puts on a long sleeve shirt during the peak UV of the day they don't need to put on sunscreen on that part of their body. That is more than 50% reduction in sunscreen pollution.” While legislation for products such as sunscreen is on it's way to protect reefs there is still much that can, and needs to be done to prevent the runoff from agricultural land from interfering with the natural growth cycles on the reef.

Another way in which the balance on reefs is restored is by implementing a slightly odd tactic; by using sea urchins. Scientists and volunteers from Anuenue Fisheries Research Center on Sand Island have been able to protect coral reefs in Waikīkī, Honolulu using these creatures. The sea urchins, which are an invasive species in other parts of the world, act like aquatic sheep consuming algae and seaweed off coral reefs, preventing them from being overrun. Recently the urchin hatchery, which supply urchins to affected sites and takes them away once the reef is clear, celebrated a seaweed-free Kaneohe Bay. This method of biocontrol is has been underway for over ten years, since founder David Cohen set up the hatchery. By growing and supplying urchins to the reef over 50 sites within the region can be monitored to keep the seaweed on the reef below a manageable 5%. “This has been very gratifying over the years. What we are doing is developing biological tools for environmental mitigation and restoration,” Cohen noted “The urchins have proven to be key tools for this work in a marine environment and are instrumental in helping save near-shore reefs that are in trouble.” 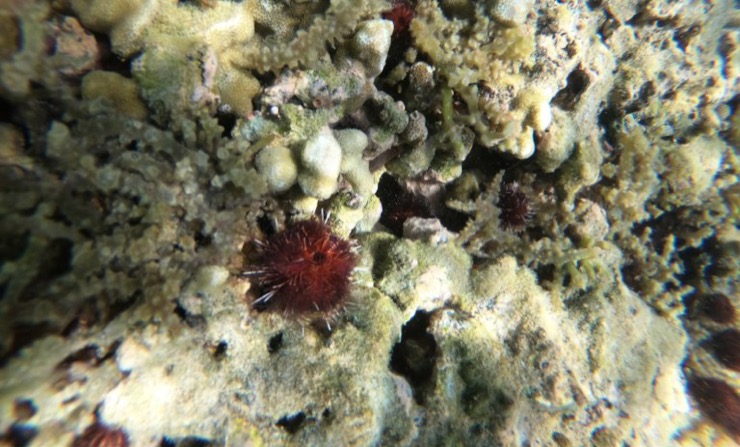 When it comes to fishing the effect on coral reefs is clear. A recent joint study from Hawai'i Division of Aquatic Resources (DAR) and Arizona State University Center for Global Discovery and Conservation Science (GDCS) looked into the long term effects of humans on coral reefs. Focusing on west Hawaii the study took into account the overall ruggedness of a reef, fishing pressures and pollution over the course of ten years to delve into their impact on the reef. What they found was a startling 45% decrease in fish biomass over that time, illustrating the great loss of both diversity and numbers of fish on reefs. What the study also noted, through looking at Marine Protected Areas and the different restrictions within them was that areas that prevented spear fishing, collection for aquariums and lay nets were those with the best maintained fish biomass. For fish that fall into the category of grazers, such as sturgeonfish, the rugosity of the reef i.e. how many fold and indents it had greatly affected their biomass. For Parrotfish, whose protection in Bermuda has seen a rapid increase in their numbers and overall reef health, the main factor in biomass was restrictions on spearfishing. This study looks to be critical for learning what sorts of restrictions to implement state-wide to ensure Hawaii's reefs have a chance at recovery. 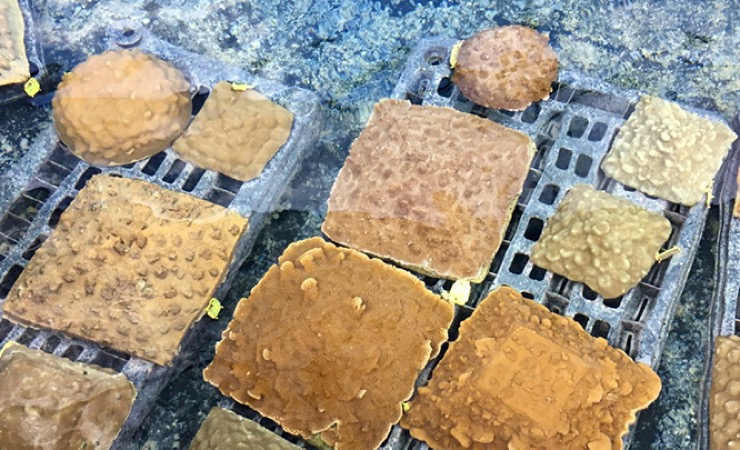 Most of the measures spoken about here are protective; even that of the grazing-urchins which doesn't so much help the coral directly as clear a path for them to grow unhindered. A final program that should be discussed it that of Hawaiis Coral Restoration nurseries. The outfit, which is run by the Hawaii Division of Aquatic Resources is aiming to restock reefs with hatchery grown coral. By growing indigenous strains using a technique that rapidly speeds up the coral growth process, the nursery can re-stock damaged areas of the reef. It can even outplant colonies after bleaching events, giving the reefs a head start at recovery. The corals are grown rapidly by cutting them in a specific way to isolate only the healthiest, youngest parts which can grow the most rapidly. Coral nurseries such as these are ideal partners for the CCell solution. We grow artificial reefs using natural seawater minerals which then support out-planted coral and eventually become thriving coral reefs. Our work is driven by a need to protect coastlines and restore this vital marine ecosystem, but we will only make the impact we strive for through the cohesive effort of lawmakers, fishers and even individuals who chose what sunscreen they wear. Every choice made with reefs at the forefront makes our job just a little bit easier.