From printed coral to hand-me-down algae populations the use of algae for both coral restoration and as an energy source is beginning to be explored.

At the core of what CCell does, aside from coastal protection, is coral restoration. The reefs we aim to build act as a backbone for corals to be transplanted onto from local hatcheries or fragmented growths. In previous blogs we have discussed the ways in which Coral adapt to the increasing temperature and acidity, conditions which are a direct result of climate change. By expelling the symbiotic algae that usually provides coral with nutrients, and switching to different food sources and growing patterns, Corals in mangrove swamps were seen to adapt to the harsher conditions, similar to those predicted for 2100. In a different blog we discussed the methods for replicating coral cover on a reef; by 3D printing biodegradable corals that encourage fish to colonise a newly formed reef while the living coral grow. Each of these small but hopeful steps towards climate adaption focus mainly on the coral polyps. But the other important variable to condiser as coral begin climate adaptation is the role of symbiotic algae. 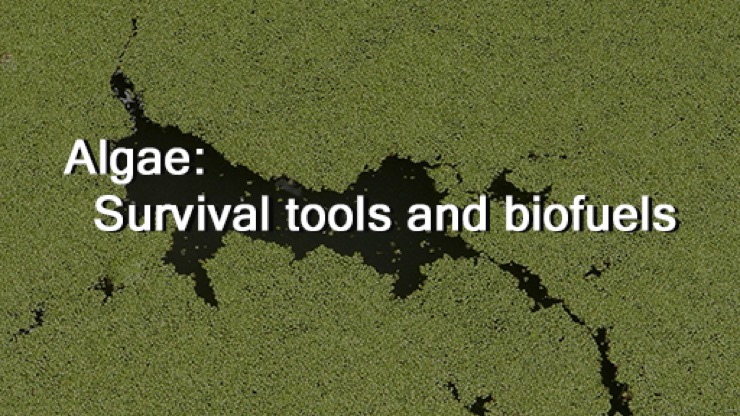 Algae lawns are often seen on canals or ponds.

Since 2016, the mass bleaching of great swathes of the great barrier reef and other vital coral habitats has been reported at an alarming pace. While this gets some press coverage the extent of this damage is not always recognised. Coral reefs provide food, shelter and an diverse ecosystem for nearly 25% of all marine life. Hence why they are often referred to as the rainforests of the sea. With over half of the coral cover on the Great Barrier Reef experiencing bleaching (and 99% of reefs predicted to be wiped out by 2040) this scale of devastation is equivalent to half the Amazon being burned down, sometimes in the space of a few days. The mass death of corals is due to bleaching which is a response to the increasing temperature and acidity of the ocean. As the world warms up (due to the burning of fossil fuels etc) the ocean acts as sink for both heat, capturing the energy of it. The ocean also absorbs roughly 30% of atmospheric CO2, converting it into carbonic acid by a reaction with water, thus adding to ocean acidification . Overall the combination of these factors leads to corals forcibly evicting their symbiotic algae sue to stress. Normal these algae work within the coral polyp, providing nutrients and oxygen through photosynthesis while the coral provides shelter. They also give the coral its distinctive colours. Without algae coral often starve to death. However some pockets of coral survive harsh conditions, often if they are more sheltered or if they are able to retain or adapt some of their algae population. 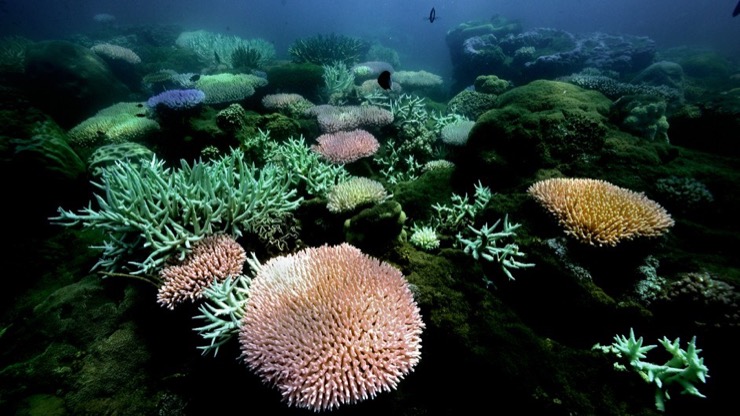 The coral that survive mass bleaching events are vital for assessing the genetic traits that may allow scientists to engineer more resilient coral in the future. A recent study from Columbia University, in which 237 samples were taken from 12 locations along the great barrier reef, began to assess the genetic advantages corals that survive beaching might have. Author Zachary Fuller, a postdoctoral researcher in biology, explains “What we discovered is that no single gene was responsible for differences in a coral's response to bleaching, but instead many genetic variants influence the trait. On their own, each has a very small effect, but when taken together we can use all these variants to predict which corals may be able to survive in the face of hotter seas.” From this information corals more likely to survive could begin to be identified and eventually bred to produce colonies that were more climate resilient but there is a long way to go yet.

As with humans, corals inherit favourable traits from their parents. This is the idea of natural selection can be explained as those able to survive extreme conditions are more likely to be able to live long enough to spawn and pass on their genetics to their offspring. This means beneficial traits get passed down between generations as they have a better chance at survival. What scientists from University of Southern California, the Australian Institute of Marine Sciences and James Cook University have found is that, not only do corals pass on genes they also pass on favourable algae combinations. Within the coral polyps are often several different species of algae, each suited to different conditions and wavelengths of light. When the temperature increases and a bleaching event occurs the algae that are not suited to the new conditions die out, or are expelled by the coral, but those that are stay on within the coral, helping it to survive. This rearrangement of symbiotic algae is called shuffling. The surviving algae then passed onto the offspring of the coral when the coral forms gametes (spawns) i.e. when it reproduces. Think of it like your parent handing you down a jacket that helped them stay warm during a very cold winter, by passing it on to you your chances of surviving a similar winter increase. While corals are slow to grow and evolve, this shuffling of their symbiotic algae indicates they may stand a better change of acclimatising to the changing climate. “Corals have more mechanisms than we thought to deal with climate change, but they're fighting with a tiny sword against a foe that's like a tank,” notes Carly Kenkel, a co-author of the study. “Their adaptability may not be enough. They need time so they can adapt.” While algae shuffling my offer some help, curbing carbon emissions and therefore stopping the acidification of the oceans needs to be slowed if not reversed to truly save coral. 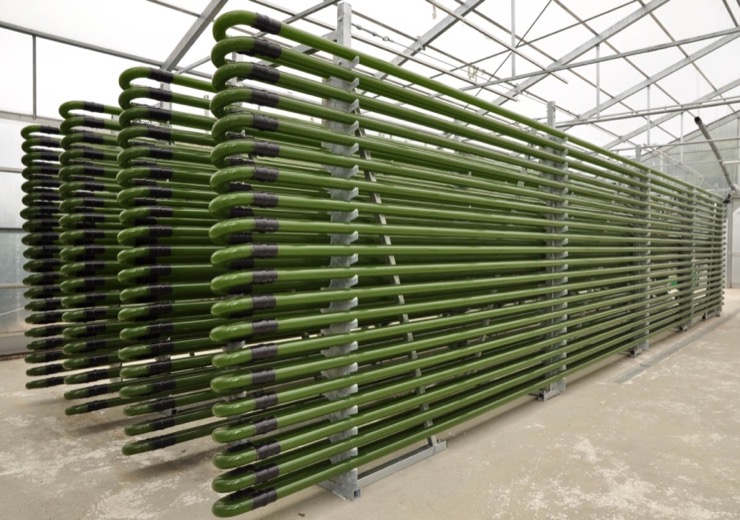 Algae on land has often been lauded as a source of biofuels, as seen with the Photobioreactors connected to powerplants that capture some of the emissions from the burning of fossil fuel. Here the fumes are pumped through algae who use it as a food source, the algae then grows, is harvested and eventually turned into biofuel. Researchers at Cambridge University have now turned their attention to the algae found within coral reefs. Like all algae, it grows quickly (often known to overgrow reefs if not grazed upon by marine life such as parrot fish) and is brilliant at capturing sunlight and turning into fatty-acids; a great source of energy for biofuels and corals alike. 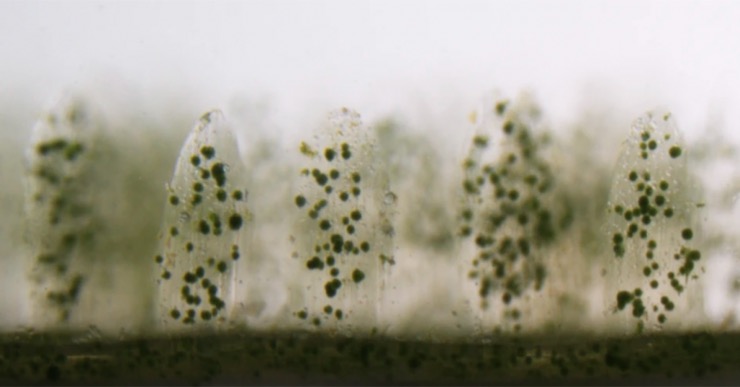 Artificial coral with incorporated algae which can be used a biofuel.

Dr. Daniel Wangpraseurt and his team at Cambridge University have come up with a way to replicate the light capturing shape and structure of corals, producing an artificial coral alternative that is designed for growing algae. These bio-printed corals are made of materials such as cellulose and have algae incorporated into them during the printing process. This incorporation process is what is currently slowing down the scale-up of this project, as the algae die when not properly incorporated. Once stable, the microalgae can grow up to 100 times faster than in natural coral reefs, while taking up less space. Dr Wangspurt is hopeful they will soon be able to mass produce these algae farms, which will be ideal for capturing greenhouse gasses along with providing a new biofuel source. Weather or not they would be viable for incorporation onto a reef system is yet unknown.

Overall the importance of symbiotic algae to the survival of corals is recognised within the world of science. With research teams focusing on how it can be used to help coral adapt to the changing climate and its other independent uses. As always more research is needed into the best methods for aiding coral survival but these advancements and discoveries give some hope to creating resilient and climate hardened coral, perfect for installation onto our reefs.