Reefs have been winning the battle against waves for millennia. How do they do it? And how can we, as engineers, replicate their success?

Waves are a major driver of shoreline erosion, and coastal communities around the world are building up defences on land to protect their homes and businesses against them. In many places though, they seem to be fighting a losing battle. The waves just keep on coming, and over time they are washing away many of these hard engineered defences.

At CCell, as you've probably noticed, we're big fans of coral reefs. It isn't hard to see why, the numbers speak for themselves: Around 200 million people in over 100 countries worldwide rely on coral reefs for coastal protection, and they can reduce wave heights by 97%. What's more, if it wasn't for human impact killing off many of the coral organisms that maintain these reefs, they could continue protecting shorelines in this way indefinitely.

So, as a group of engineers looking to tackle coastal erosion, we must ask: How are coral reefs doing it? How are they winning the fight against the waves that so many human constructions lose?

Below, I'll be explaining why waves can be bad for shorelines, what coral reefs do to protect against them, and how CCell Reefs have been specially designed to achieve the same results.

The problem with waves

Waves moving towards a shoreline possess kinetic energy and the bigger the wave, the more of this energy it has. One of physics' most well-known rules, the “first law of thermodynamics” states that energy cannot be created or destroyed, only transferred from one form to another. For waves, this means that when they reach the shoreline all this kinetic energy has to go somewhere. If you've been to the seaside during a storm then you'll know that some of this energy ends up as sound, with waves crashing as they break onto the shore. Unfortunately, not all of their energy ends up as this often rather pleasant noise. More of the waves' energy gets transferred to the shore itself, where it breaks apart rocks and sand and drags them back out to sea. 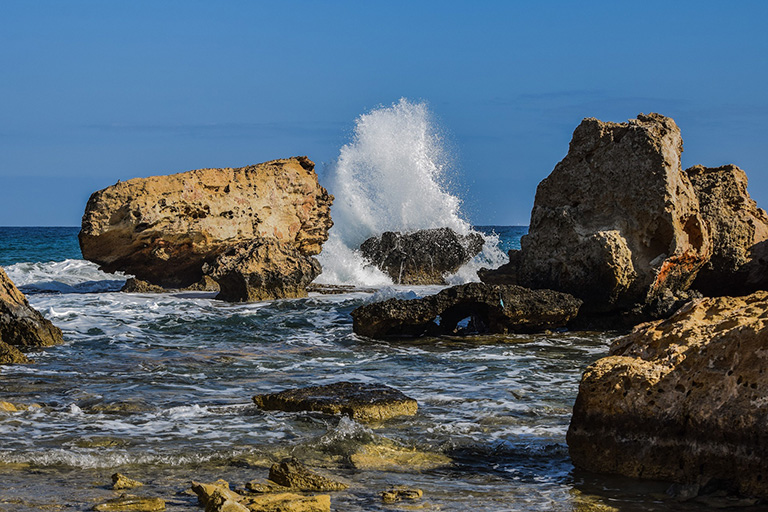 A wave giving some of its kinetic energy to a rock. The shape of these rocks is a result of lots of wave impacts like this eroding their bases away over time.

On a sandy shoreline, not all waves will cause erosion like this. In fact, some smaller waves use their kinetic energy to push sand back up onto the beach rather than taking it away. Nevertheless, erosion from large waves in storms is one of the major causes of coastal erosion around the world.

In order to protect the shoreline, we need to stop the waves' energy reaching it. The traditional hard engineering solutions installed on land do this simply by getting in the way. These structures, like sea walls and revetements, form a solid barrier just in front of the shoreline and take the full force of the waves themselves. This works in the short term because we can make these structures much stronger than the natural rock and sand; the impact of a wave doesn't do much to a solid concrete wall. But waves are nothing if not persistent, and the salty seawater makes for a harsh environment. Over time, as millions of waves crash against these structures, they will inevitably degrade and need to be repaired or replaced.

Coral reefs to the rescue

Turbulence probably isn't something you hear about every day - though you'll no doubt have heard a pilot mention it before turning the seatbelt light on in an aeroplane. In fluid dynamics, turbulence is used to refer to fluids that are moving with chaotic changes in their pressure and velocity. In an aeroplane the fluid is air, and the chaotic movement manifests as that scary shaking around of the plane as you move through it. In the ocean, you will most commonly see turbulence as white foam on the surface, and we are interested in it for a simple reason: it greatly increases the rate of dissipation of kinetic energy within the fluid itself.

Turbulence revealing itself in air as swirling patterns in the clouds, and in water as foaming and churning of the surface.

What this means, in short, is that if you can make a wave more turbulent its kinetic energy will reduce, all by itself.

This is exactly how coral reefs protect the shorelines behind them: They induce turbulence in waves that pass over. As these waves move on, their energy is gradually dissipated and by the time they reach the shore, there is little left to cause any damage.

The main way in which coral reefs induce this turbulence is by making waves break. A normal wave has a relatively smooth, clear surface, indicating that it isn't very turbulent. These smooth waves can travel over vast distances without losing much energy. After it has broken, the surface of a wave rolls and churns as it moves forwards, indicating that the flow is much more turbulent. These turbulent waves quickly die down after breaking as their kinetic energy is dissipated.

Two stretches of shoreline less than 5km apart at the same time. On the left an offshore reef protects the shore while on the right there is no barrier to the waves.

The key advantage that coral reefs have over hard-engineered structures in this regard is that they don't feel the full force of the wave themselves. By being submerged below the surface, reefs essentially "trip up" waves as they pass over. These waves then dissipate energy within themselves as they propagate onwards, and the reef comes away unscathed. Furthermore, on a sandy shoreline, being submerged in this way means that any sediment being carried towards the shore by waves is not interrupted.

At CCell, we have designed structures to mimic the effect that natural coral reefs have on waves. As we know from the above, this means that our artificial reefs are designed to break waves, induce turbulence and dissipate their energy. Our reef structures break waves in much the same way as natural coral reefs: They interrupt the natural flow of water under a wave, forcing the wave to steepen and then break as it passes over.

As I've talked about before, this breaking induces turbulence at the surface and is very effective at dissipating energy. During the design of our reefs, though, we realised that we could make them even more effective by inducing turbulence lower down in the water as well. By giving our reefs a degree of porosity, we induce even more turbulence as the water is forced to accelerate through small gaps in the structure. This turbulence isn't as easy to visualise as the aggressive white churning on the surface, but still has a big impact on the wave.

CCell reefs are therefore designed as slightly porous structures, sitting below the surface of the water some distance away from shore. They cause large waves to break, they induce turbulence in water that flows through them, and they allow sediment to be carried over them towards the shore.

“Biomimicry” and “nature-based solutions” are popular buzzwords in the engineering world at the moment, and with good reason. Designers in a wide range of fields are realising that, often, nature has already found a solution to their problem through millennia of evolution and adaptation.

What is interesting in this example of learning from nature is that the coral reefs don't “know” that they are protecting the shoreline, and there is no clear evolutionary advantage for them to do so. The impact they are having is just a side-effect of a symbiosis with organisms wanting to grow close to the surface to get access to sunlight. Nature has produced effective long-term protection against waves without even trying! It may take a bit more effort for us to achieve the same results, but the blueprint for success is already out there.

The mechanisms of wave height reduction aren't the only way we are taking inspiration from natural coral reefs: Read more about how we form our reefs and the similarities in the rock we grow here.